Hustle culture itself has become toxic. We are addicted to the hustle, money and screen time.

Wait, isn’t this site kind of centered around side hustles? I’ve introduced several side hustle ideas on this site to try as well as ways to pay off debt with side hustles and more.

And yea, I love side hustles but it is a love-hate thing.

Now it is referred to as the toxic culture of side hustling and the several downsides to the gig economy in general.

But, what even is a side hustle and why did we start calling it that?

What is a side hustle?

I’ve answered this question before in a past post of mine but to reiterate, a side hustle is anything done on the side of other jobs whether they are full-time or part-time.

Side hustles can really be anything as it has become a blanket term so widely used in the last couple of years with the rise of the gig economy.

What makes a side hustle toxic and the different meanings of that?

There are many ways a side hustle can be toxic:

First, there was the way I abused side hustles in high school and college which I would spend recklessly until I ran out of cash and only then would I side hustle to get by (which was going to the thrift store to sell clothes, sell CDs and books at a local Vstock, etc). That would be my toxic relationship with side hustling.

Except then it wasn’t called a side hustle – I actually didn’t have a name for it.

Another example of a toxic relationship with side hustling is if you were to turn one hobby into a side hustle, it might be hard to find or do a hobby without thinking of some way to monetize it.

It’s one thing to make money playing a couple of games on your phone but it is another to try and monetize every little thing you love doing. That’s going to bog you down pretty quick and you might not end up loving those things so much anymore.

Then there is the toxic situation of working multiple jobs and “hustles” to get by often working for unstable pay and few workers’ rights.

If you have the privilege to do so, a side hustle could be a passion project you started on the side of your full-time job for fun. However, most people take on a “side hustle” for financial reasons and the majority of them legitimately need a second income to get by.

The Rise of The Gig Economy

49% of Americans under the age of 35 now report having a side hustle, according to Fortune.

Uber and Airbnb were some of the first real “gig” apps and now there is a new one coming out every day. Some of them offer some sort of benefit like the Steady app that offers discounted insurance, ways to save on prescriptions, help with tax deductions and more but most offer no real perks to the workers.

And let’s face it, even though those benefits from Steady are nice, it isn’t like they are offering you actual medical insurance.

Some would argue “but restaurants and people in the service industry don’t get that either”. You’d be suprised how many more benefits restaurant owners are adding to their options for those who want to opt-in.

With apps and gigs where you use your own car, that is a lot of risk to take on. Just like with Airbnb – you are letting strangers into your home if you are there when they arrive and you have no idea what you are walking into. I hate to think worst-case scenario but things happen.

I understand the freedom with side hustling on these apps but it is allowing people to let their guard down when maybe they shouldn’t. It also opens the doors for MLM scams and schemes to take advantage of people in their time of need, offering what they do as a “legitimate business opportunity” when it is the opposite.

How to Avoid Falling Into Toxic Side Hustles

You could avoid side hustling all together but that’s no fun. Pay attention to the red flags (in behavior and who you choose to work for/with).

My Toxic Relationship with My First Side Hustle

Warning: The following paragraphs contain content about disordered eating behaviors and could be triggering to some.

I was reckless all around as a teenager – insecure and anorexic. With the anorexia came the constant need to shop for self-approval (before my days of obsessing over capsule wardrobes).

On lunch breaks, before work, and after work, I would walk the mall and make a thing out of it. I would always try on clothes smaller than the last time to see if I dropped a size and if so – success! Then maybe a smoothie to celebrate because that and fruit were about all I allowed myself to have.

This behavior isn’t cheap and my movie theatre paychecks would disappear the day I got them. A lot of those clothes would cycle their way into the thrift store as I would resell them there for gas money to get through the rest of the week.

This is not the way you want to side hustle.

If you could avoid toxic behaviors like this, great! You’re a perfect human being who has no insecurities, impulses, addiction issues or baggage at all. You probably don’t need to be reading this post then.

But you’re here so I rather talk about fixing it – or instead, moving forward towards healing.

As soon as you notice some unhealthy behavior with what you are doing for extra money whether that be the way you are carrying it out, a form of addiction or burnout, take note immediately. Take a mental note and a physical note of it and make sure you make yourself aware.

From there it is up to you how to handle that. You could speak to someone (Talkspace is a great low-cost way to talk to therapists on your phone) or you can try to address the root cause yourself and try to heal.

I suggest you absolutely reach out for help through to your family, friends, someone on an app like Talkspace or any support system you have in place. We can get a lot more done together than alone.

When looking for a side hustle to take on, make sure to do all the research you can on a company. Google is great for finding reviews on companies and the way they work and treat their people. Google the name of the company + “reviews” and read through as much as you can until you’ve come to a decision to reach out to that company and try a gig on their app or work for them as a second job.

The same thing goes for people. If someone you know wants to start a side business make sure you can work with that person and that they won’t take advantage of you. Seek advice from a lawyer and you might also want to have one present as you form your business.

Side hustling sounds like such a scuzzy word to me now. I don’t know if it is because of my past relationship with what is now called a side hustle or the fact that the word just sounds kind of spammy.

I did use to love them for a moment there once I finally got my act together and my wife and I started hustling more for extra money to fast track debt payoff. I still do. It is possible to find a side hustle that clicks with you and do it in a non-toxic way.

But as I see so many people working several side hustles and really struggling to get by, something has to change with this new gig culture.

I don’t like to get political on this blog but with money, we have to get political. This isn’t only happening in America, the U.K. is experiencing this same side hustle culture and it says something about if these countries have a sustainable living wage. Not only that, but what systems are failing that the people of these countries have to work multiple jobs just to get by?

These gigs and apps should do a better job of protecting their workers and their rights. The gig culture is still new and I can see more and more apps adding perks and benefits into their offerings but we have to help urge them on in the meantime. There have been a couple of new laws (like AB5) that were introduced to help regulate these large companies that hire gig workers but those laws are still very much a work in progress.

Contact support on those apps with concerns, contact the company and alert them on ways they can help their workers, tweet them, and tell media outlets your experience and concerns too. Get the word out there and the more we talk, the more they’ll budge.

Comment below with your own toxic side hustling stories and experiences. How did you overcome it and what did you learn? 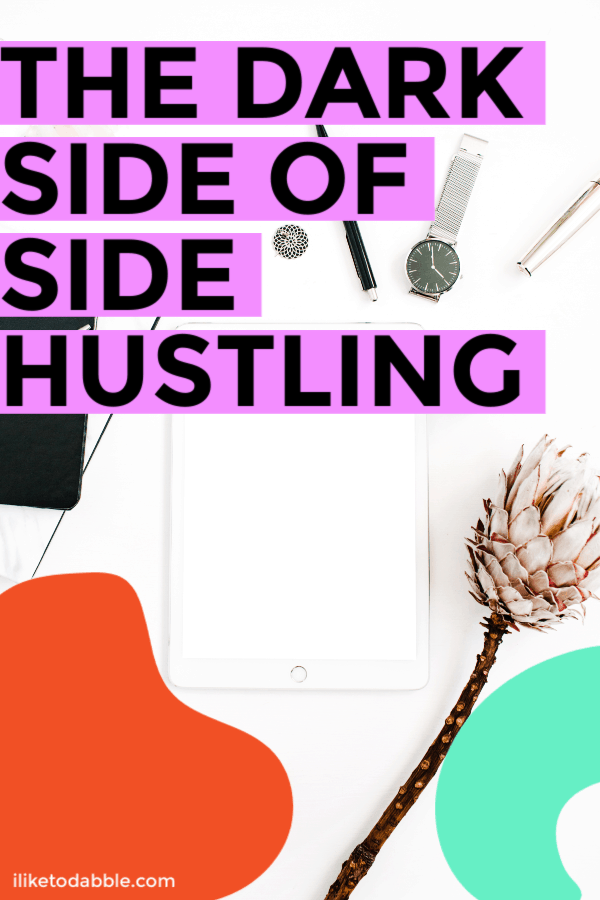