Last Updated on November 2, 2022 by Daniella

According to LGBTQEconomics.org, 25-62% LGBTQ consumers report experiencing financial challenges because of their sexual orientation or gender identity.

In fact, LGBTQ+ folks lose out on millions during their lifetime due to the LGBTQ wealth gap.

No, this isn’t something that you can side hustle your way out of or negotiate your way to equal pay. I mean, of course you can do everything in your power to build lasting generational wealth for you and your family but it isn’t up to you to solve the whole that is the LGBTQ wealth gap.

When you grow up in a society strictly built by and for cisgender heterosexual people and couples, you easily get left behind when you don’t fit the mold. Especially when many financial institutions still won’t come up to date with the LGBTQ+ community, nor try to openly support them.

One third of individuals who presented bank cards with a name or gender that did not match their presentation reported harassment, denial of service or even physical attack. Imagine if your bank put you in danger like this day in and day out by invalidating your identity and causing you financial trauma?

This doesn’t even begin the scratch the surface of the LGBTQ wealth gap.

The wealth gap is the unequal distribution of assets between residents of the U.S..

If you’re thinking “oh, well life is unfair and people should work harder” – it’s more complicated than that. Wealth inequality is fueled by unequal systems at the roots of our society and denies people an equal chance to participate in the economy.

It’s only been until recently that more policies have been put in place both in the government and in the workplace to provide more protections for LGBTQ+ Americans but many of these policies still fall short of what’s needed.

There are actually 4 major contributing gaps that form the LGBTQ wealth gap being the income and savings gap, the information gap, the market gap, and the policy gap.

Let’s explore each of these deeper and how they effect the LGBTQ+ community and individuals.

On average, LGBTQ+ Americans earn less than their cisgender and heterosexual counterparts.

If you’re looking to open an Individual Retirement Account, we recommend M1 Finance. You can easily build your retirement plan and maintain it in their easy to use interface. Click here to get started.
Related: The Costs of Transitioning

The information gap refers to the gap in research and data of LGBTQ+ folks’ lived experiences across the world (including in countries where it is still illegal to be who you are or love who you love). This gap blocks progress toward inclusion and true equal human rights.

When we look at specific gaps in pay, savings, etc, there is already a limited data set due to the amount of danger someone can put themselves in for even coming out. According to MarketWatch, 50% of LGBTQ+ Americans are not openly out at their jobs.

In 2019, the World Bank partnered nonprofits, businesses, & policy leaders to collaborate to create the information that can catalyze
data-driven change, including:

When members of the LGBTQ+ community and businesses seek products and services, they are often met with discriminatory treatment as well as unfair, deceptive or predatory marketing practices.

The market gap is the gap of equal and fair access to loans in the market.

In a study of Home Mortgage Disclosure Act data from 1990 to 2015, Iowa State researchers concluded that same-sex couples, of similar financial & credit quality to heterosexual peers:

The policy gap is the gap in existing policies that provide protections for LGBTQ+ Americans.

It wasn’t until 2015 that the U.S. ruled it legal for same-sex marriage and queer people across America finally got that equal right to marriage. 5 years later in June 2020, the Supreme Court ruled it illegal for an employer to fire someone because of their sexual orientation or gender identity. Which was only 1 year ago.

And today, we have The Equality Act.

According to the HRC, The Equality Act would provide consistent and explicit anti-discrimination protections for LGBTQ people across key areas of life, including employment, housing, credit, education, public spaces and services, federally funded programs, and jury service. The Equality Act will soon get a vote in the Senate, and if it passes, will shimmy on its way to President Joe Biden’s desk.

As you can see, policies for LGBTQ+ Americans are in their infancy stage and still have a long way to go.

Everyone Pays The Price

Not only are LGBTQ+ Americans paying the price of wealth inequality. 1% of the GDP is the cost of homophobia and transphobia to a country’s economic well-being.

Plenty of studies have made a business case for inclusivity in terms of gender and race. But companies that venture beyond this narrow definition of diversity reap even larger rewards. According to Credit Suisse/McKinsey, companies that include LGBTQ+ employees outperform their less-inclusive peers by 10 percent on average.

In addition to the ethical and moral obligations we have as individuals, we, as a country, discriminate against this community of entrepreneurs — job creators, taxpayers, essential service providers — at our peril. The cost of prejudice is enormous.

What to Do Going Forward

Alright, we all know this system isn’t fair but what are we going to do to stop it?

Well first, if you’re an ally –

Denounce homophobia and transphobia at every chance you get.

Don’t tolerate it, not even for a second. Influence is powerful, use yours for good.

If someone says a slur or something ignorant about someone else in your community, show them you disagree and aren’t comfortable with them speaking like that. Don’t support homophobic or transphobic businesses or laws and policies that you see in your community and show open support for LGBTQ+ events, businesses and initiatives in your community (including with your wallet too, voting with our dollars is one of the best ways we can support what matters to us).

Encourage transparent and equal pay policies and hiring policies at your employer by reaching out to your HR and asking what they are doing to ensure folks are paid equally. If you are in a position of power or close to it at your employer, share your knowledge with others as well as your salary and any negotiation tips you have. Help to lift others to your level, it’s lonely up there.

If you have financial knowledge, help your friends set up savings and retirement accounts. Advocate for these sort of classes at your schools and employer.

And lastly, real change can’t happen without the laws to back them up. Look at laws to provide strict hiring policies, more financial resource access, and further prohibit discrimination – like the Equality Act. Sign petitions to support change like the Call Me By My Name petition to call for banks to let nonbinary and trans people use their chosen names and to use their true name at every touch point. Banks put these people in danger by using their dead names and outing them. In a survey, one third of individuals who presented bank cards or other ID with a name or gender that did not match their presentation reported harassment, denial of service or even physical attack.

If you’re in the queer family –

The odds are stacked against you and even more so if you’re disabled, BIPOC, or your identity intersects in another way.

Almost none of us are taught how to think about money, nor manage it effectively. Add that on top of financial institutions that don’t want to openly support our community and of course we have money problems. Give yourself some empathy and let’s move forward.

To you, what is most important is access to the tools and resources to give you a level up. This means how can you make more money, how you can invest that money, and build your financial future so you can thrive and live your best life.

I suggest following other queer financial creators like myself that can help guide you on your financial journey:

For ways to increase your income, take the side hustle quiz 👇👇

Some additional resources to utilize:

These are just some of the ways we can start making small influential change and put in the foundation for some real lasting impact.

What other ways do you think we can progress forward? Let us know in the comments below as this article doesn’t even come close to everything that encompasses the LGBTQ wealth gap. 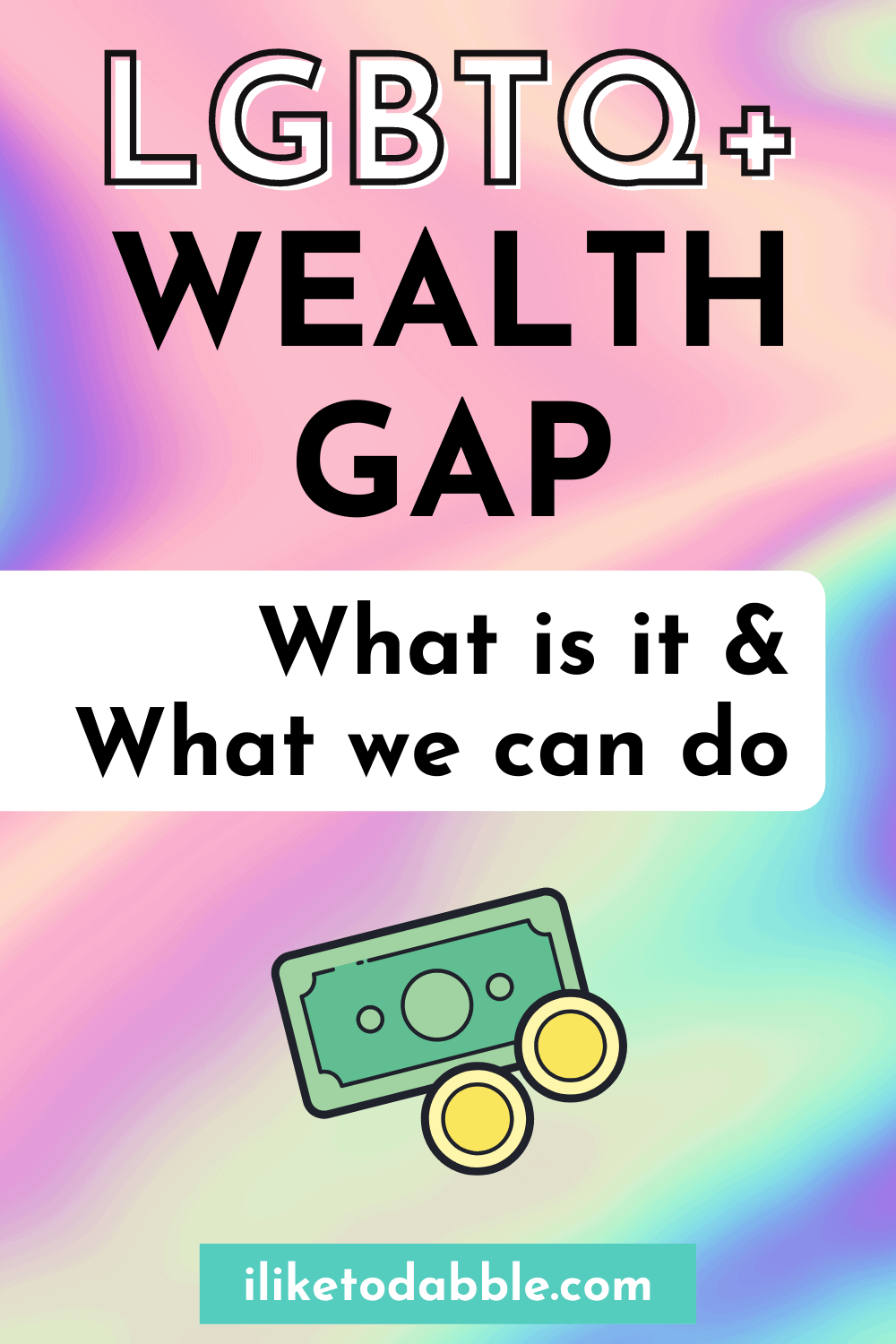